His Holiness, Sri Sri Sri 1008 Baba Sevananda Ji Maharaj  was a true incarnation of compassion,  ever giving, ever loving.  His devotees lovingly called him Babaji. Baba being an affectionate name for an elder father figure who you would respect.

Babaji always radiated pure love and was a true incarnation of Krishna. He came to uplift the positive energies of this world, to maintain the higher frequencies that exist in the cosmic realm, and gift these energies to the Earth realm. A true master who was constantly working to maintain the balance of the light energies of the earth. Babaji constantly radiated with the divine light energies.  If you were lucky enough to be in his presence, you could feel these divine energies radiating from him.  It was calming, healing, exciting and awe inspiring.  Just to be in his presence you were healed. 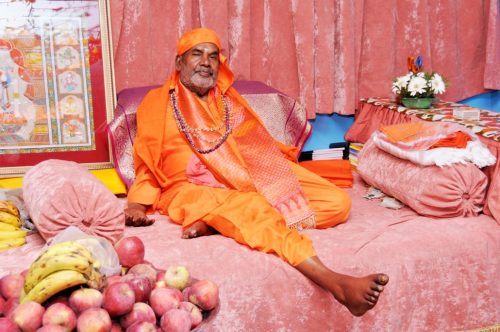 Babaji spent the last 30 plus years of his life building the Baba Neem Karoli ashram, on the outskirts of Delhi, in the village of Jonapur. Babaji left his physical body on December 13th 2008

When Mad cow disease was at its highest, Babaji within a period of 9 months, built a Goshala (Cow barn) to honour the cows  and to rebalance the energies towards them, by doing daily fire ceremonies and prayers.  He had the cows bathed and garlanded to balance out the impact.. The Goshala was carpeted , had heaters, air coolers and fans to keep the cows in comfort.  In Babajis words the cows feet should not get cold.  He installed coir mats made from coconut husks.

He wanted to have the cows respected to the highest level to balance the energies. Getting people to get back into the respect for the cow.

This is just one of the many ways he was serving the world and the community around the ashram.  Regularly assisting those who seek his guidance and healing.